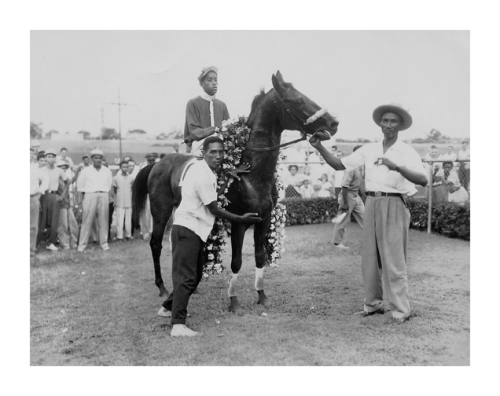 The wonderful photo above is property of the no less legendary former jockey, Roberto “Bobby” Reid.

When the history of Panamanian horse racing has been completed, the preponderant figure of the late Henry “Takeaway” White will figure largely in the annals of the Sport of Kings on the Isthmus.  Although he was just one of the legendary Westindians who strongly influenced the activity of horse racing in Panama, he remains its most unforgettable proponent.

Henry White was originally from Jamaica and, according to the magazine “50 Years of Horse Racing” came to the isthmus on May 6, 1913.  Aside from being an extraordinary trainer of race horses, he was also an excellent jockey noted for being a good starter during the era of the “Huincha.” This recalls the time when racetracks did not have automatic starting gates. On some tracks riders would wait in order behind the “Huincha”- a starting tape or ribbon- for their signal to take off. At the start, the Huincha was released and it fell to the ground, prompting the horses to start the race.

White was also a notable blacksmith who originally came to outfit horses with horseshoes, a rather exacting skill particularly crucial in the highly competitive sport of equestrian racing.  He later passed this valuable knowledge on to his son Leonardo White.

Henry “Takeaway” White was also Panama’s first veterinarian and he not only took care of the animals entrusted to him but he also performed as a surgeon and operated on other horses that required his wisdom and services.  This is why the first veterinary hospital bore his name.  Trainer Eric Hugh Gittens, one of his disciples and a recognized veteran in the field, has said that, for him, Takeaway White “was the best…he knew about everything and that was why everybody went to him, especially some of the top trainers and jockeys, like “Sam” Jiménez, who never left his stable.”

During his more than 50 year career in horse riding, Henry White was one of the most important and prolific figures coaching and winning over 1000 races.  Although the leading records officers of the Panamanian Stud Book, which was founded in 1948, recognize only 866 triumphs of 5,713 races, he was recognized as bringing in total revenues of $580,499.04. In addition, he was credited with 22 classic victories and only one draw not including, of course, his successes in the Clásico Presidente de la República (an annual tradition) of 1927 and 1928 with Queen Mora, successor to the great Copiapo, and in 1947 with Okinori, as well as many more that occurred between the 1920s and mid-forties.

As for his charismatic personality, Gittens admits that Henry White was a nice person and “good people” and he always counseled him to keep the horses in good condition, treat them well and never use prohibited drugs or medications on them.

For Henry White the English steed, Main Road, was the best horse of all time who brought him two significant victories in El Presidente de la República of 1952 and 1954 respectively, although he acknowledged the quality of Copiapo, property of Don Raul Espinosa, another of the great pioneers of this activity who is considered the father of the Panamanian Horse Racing.

In so far as the national horses are concerned, White gave a lot of credit to the legendary Ivan, an animal with an excellent track record, and we must also not forgot, Royal Eagle, a native born race horse and property of Don Arturo Delvalle.

Henry “Takeaway” White along with Luis “Flaco” Rodríguez , Isaac “Sam” Jiménez and Luis Humberto “El Mago” Farrugia, have all been included in Panama’s Horse Racing Hall of Fame, and deservedly so since without their skill, patience and wisdom, particularly in the case of Henry White,  Panama would not be the “cradle of the best Jockeys” or one of the most exciting and noted racing venues in all the world.

Credit for background data for the preceding article goes to Amett Pérez K. of the Crítica Libre.

17 responses to “Henry “Takeaway” White, The Horseracing Genius of Panama”